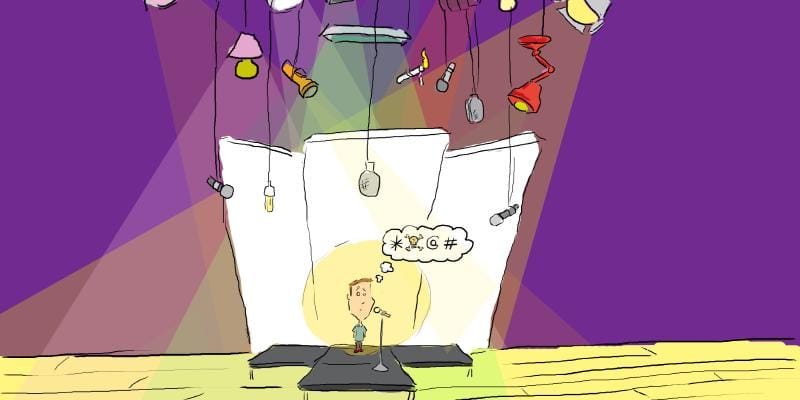 I have some pamphlets distributed. No need to look at them right now.

According to most studies, people’s number one fear is public speaking. Number two is death. Death is number two. Does that seem right? That means to the average person, if you have to go to a funeral, you’re better off in the casket than doing the eulogy.

This was said by the comedian Jerry Seinfeld in 1993. 3 out of 4 Americans suffer from Glossophobia or the fear of public speaking. It leads to a 10% impairment of wages and 15% impairment in your promotion. This thing is very real. That is why we are all here right. Lets try and understand it. Glossophobia is a disease. It has its symptoms. As toastmasters all of us have given speeches. Lets discuss some symptoms of extreme stage freight out - raise your hand if you can state some.

Now that we know these symptoms lets turn for some help from our friend Charles Darwin. Have a look at the bottom left of the pamphlet that I just gave you. You see this list. That’s exactly what we feel on the stage right. Increased heart rate - you can hear it pounding, bladder relaxation - happens to some, tunnel vision - you are stuck frozen on the stage, shaking, dilated pupils - see the stars in broad daylight, flushed sweaty faces, dry mouth, slowed digestion - butterflies and hearing loss.

Darwin was not studying humans on the stage. He was studying animals in front of the predator. That is where this reaction comes from. We as humans are just slightly sophisticated, a little better mannered animals and our animal instincts still rule us. The cave man lived in small groups. At any time he was out in the open surrounded by others was when a pack of lions or wolves was after him. There is one thing scarier than death. That is death by a pack of lions tearing apart you and your legacy. And that is what feels on the stage. The audience feels like wolves. Fangs growing out on all your faces. Those teeth growing sharper. Your nails turning into claws ready to pounce. I am mortally afraid. Feel like running.

Darwin talked extensively about the fight or flight response in animals what I call the freight response. When in danger the hypothalamus in the brain causes the pituitary gland to release adrenaline, the emergency hormone. And adrenaline can cause all these symptoms. We are in the adrenaline rush all the time on the stage. This heightens our senses and prepares us to run. We notice our mistakes more - did I just step on a twig and we want to run for our lives because when a pack of lions is after us, we rarely do recover.

Our lives are not at stake on the stage, but studies have shown that humans overestimate them. The social animals are scared of their credibility, their position in society and their legacy. Being ousted from the community is worse for the cave man than being killed. Because not only him, but his family would also suffer. The odds are much bigger. There is something worse than death - death of all you care for.

So now we know that speaking on stage is like taking on an entire pride, lets talk about the three ways to be able to do that. 1 - Prepare. Prepare fighting animals. Start with a maimed lion, then a single lion and then promote yourself to the pack. Speak at small places, at toastmasters, at contests and then at conferences. 2 - Prepare. Come prepared with a armored coat, infinite ammunition and the best rifles you can get a hold of. Prepare your speech and the background material so that you are confident that your knowledge is with you. 3 - Prepare. Prepare the arena and your emotions for the battle. Try and practice on the real venue before the D-day. Bring a few friends to cheer you up. Take a deep breath before going on the stage. Once you are there, its a fight. Flight is not an option to the winners in life.

Glossophobia is a natural reaction that happens to everyone. We need to prepare to condition ourselves to the adrenaline rush. Mark Twain wrote - There are two types of speakers in the world: the nervous and the liars. The science is against our success. We need to defeat those odds. Prepare, Prepare and Prepare. Thank you.