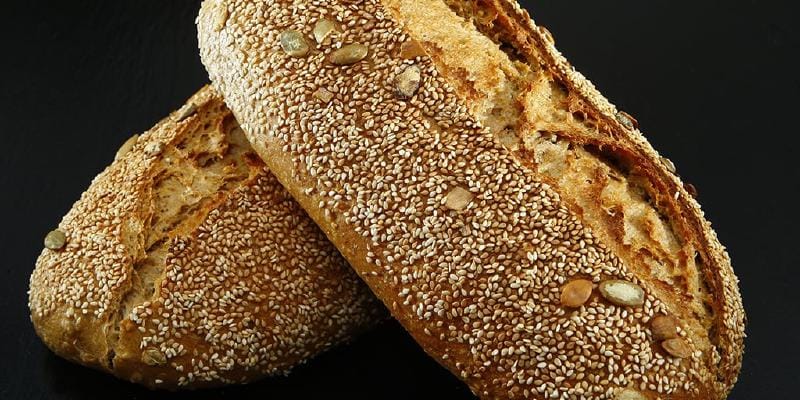 Now that you’ve enjoyed the hearty meal, I feel comfortable talking about food. It is not like it is 12 PM on a Sunday afternoon and all of you are gearing up to run for lunch. It is not like I will pick up this bread and someone will come up and snatch a quick bit. Looking at this soft piece of bread I am always amazed how mankind discovered the process of making it. The brutes that hurled stones at their prey. Look at the fine details. The delicate pores caused by just enough bubbles in the flour with so much gluten that it could still stay together and not fall through. Then these pieces of fruit sweet and savory. Yummy - just perfect. Unless you believe that god gave us these recipes, you should be wondering how the cave man discovered everything – first the grains, and then the process. From the look of it, the wheat grain is not really sumptuous, hard and tasteless. It will likely cause stomach upset if eaten raw. Yet it has been grown for thousands of years with this perfect recipe. Now without involving the historians and their learning, I will be trying to apply today Darwinism to the discovery of food and see how pure competition and natural selection can lead the cavemen to such delicacies.

According to Darwin’s theory, the only reason for all diversity is competition – for the scarce set of resources. From the first amino acids to mankind, all the evolution has been led by the survival of the fittest. Whatever won the genetic lottery was better suited to the surroundings and thrived for generations while the weak was decimated. Let us try and apply this to food discovery for cavemen.

From the apes, the cave men had already discovered two ways of getting food - hunting and foraging. The strong had the power to run around and trap an unlucky beast to make a proper meal. The could climb on the trees and get to the toughest of fruit – tasty and delicious. The most strong and skillful were mostly and like the kings in the medieval times had plenty of left overs while the weak like hyenas ate the trash and were still hungry.

These unfed cave men were desperate – find something or die. Desperation is the mother of invention. They were not skilled hunters and therefore had little spoils of the hunt and the best fruits were already gone. So, they were happy to experiment. The needy would pick up whatever they could find – wild berries, barks, seeds of any kind including these little wheat seeds. They would mix these with their meat in their soup so that there is a fair share of the meat in every meal alongside the seeds. Now many of these were poisonous and eating them was certain death. But with the sheer number of experiments, even if one in a hundred succeeded, the information was known. All spices, grains or any plant food has been discovered with such approach.

This information would form the first trade secrets. I wouldn’t tell {person from audience} about these seeds that you can live off. Let him hunt more and risk his chances while I sit at the comfort of my cave with half the hunt. Eventually he would come to know so I would start hoarding these. Don’t know if they last but still, maybe they will for me. So, everything was hoarded. Now the plants were also playing the same games of natural selection as we were. The plants whose seeds could survive the winter were the most precious of human possessions and therefore survived while the ones that did not needed to be extremely tasty to be preserved.

Now these grains are far from bread, but it is easy to decipher bread once we know eating these grains would not kill us. The kids and the old could not chew these hard grains so grinding them between rocks to a powder was the solution. Flour and dough were the easy discoveries. Some seeds would actually fall down on the ground and grow – so farming is the easily discovered next step.

Domestication of animals was also an easy step. The pets were easy sources of meat and milk. Why hunt if you could pet. Some pets were there for food others for security. The docile wolves became dogs and docile tigers became cats. The cats are smaller than dogs because the tiger is scarier than a wolf.

But what about yeast and baking. Frankly, this is a lucky discovery. Not all civilizations found it. But Darwinism can explain it. Early farmers were far from perfect at weeding. Weeds with wild yeast would grow amongst the crops, through the grinding process right into food. Bad weeds would kill people, but you already know that’s how Darwinism actually works. With no refrigerators, any left overs had to be left across meals over time. Guess what, it would grow big with the yeast, and the people loved it. So, they worked hard to figure out what it was and isolated yeast that are now reared. The oven is the easiest of inventions. Cooking food over burning wood means that after the food was cooked and fire extinguished the hot logs were still there. All that needed to be done was for someone to leave morning’s leftover dough on the logs and see fine bread. Once you taste it, you will eventually make it perfect.

Now as you understand the theory you can apply it to anything. Yogurt was likely another case like yeast. Paneer, some desperate individual trying to salvage milk that he accidentally spoilt. It has been subtle, but history has one lesson for us – The weak, the losers and the desperate end up taking the world forward. Whatever be the odds that are setup, the one that survives makes the goliath irrelevant by changing the rules of the game. To survive we have to participate in this high-risk high reward game at all times. By the rules of natural selection, even if we don’t risk, someone else will and we will be history.

The real video was not recorded. I have one of the rehearsals.

Image by Mogens Petersen from Pixabay