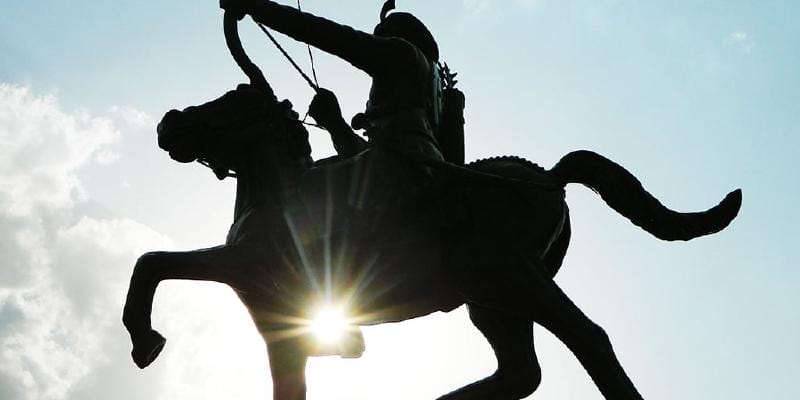 Today I am going to share a popular folk lore in India, sung as a ballad with over 16000 verses. The story is historically inaccurate. Historians don’t believe in the love story. According to them this was just an arrogant ruler who angered his neighbors and then suffered a shameful defeat from an enemy he had earlier let live. But the folk lore differs, and the story is definitely the one to indulge in.

The story starts in the green fields of the most fertile lands in the world. The spring breeze on the sunny day clears up the dew on the grass adding the missing humidity to the atmosphere trying to setup a perfect day. The air has a strong stench of fresh blood, blood of the barbarians desecrated by the royal army. The prince stands with his sword inches away from the neck of the barbarian leader, the clan lord who had come all the way to plunder Delhi. The clan lord, tears in his eyes begs for forgiveness. He had a people who needed him. The prince looks at the destruction all around, sheds a tear and then extracts a promise, promise that he would never venture back far east, into this land ever again. He turns and marches back to Delhi, his army trotting in a fine rhythmic fashion. The story of his bravery strung into rhythms reaches far and wide, including to the neighboring kingdom which has a larger army and a prouder king.

The velvety carpet, the ornate flowers and the beautiful paintings marked the essence of royalty. The room was decorated not only by the rarest of the jewels on Earth, but also by the rarest of men, the finest kings and princes all over the subcontinent, the fairest - oiled, shaven with muscular bodies and shining armor. All but one, the neighboring prince who had failed to bow down to the ruler, the songs of whose intelligence and valor pierced through many hateful ears in the courtroom. He was present virtually, as statue – a door boy pushed outside of the room to be shamed. The bride, the most beautiful women of all was to choose her husband today. Women were pawns in the game of the thrones. No one cared that her heart was lost to the statue that stood outside the door. The princess pushed forward trembling with her wedding garland in her hand. The open window brought in the wind and the magic of love took over. She overcame her fears and anointed the statue as her husband. Suddenly like magic the prince of Delhi appeared from behind it, swopped her into his hands as he jumped off the window onto his waiting horse, fleeing away even before the royal army could get their hands on the hilts of their swords.

The story lands to the same battle field where it began, this time with the swords reversed. The king had tipped barbarian against his own son in law, the ruler of Delhi who had pardoned him earlier. He had attacked the sleeping army for he believed in no honor or bravery, only in victory. The Delhi king was blinded in both his eyes and left there to die. Delhi fell, and the rest of India was next. The barbarians ransacked kingdom after kingdom including the one of the traitor till there was no other king left. Vanity and vengeance had destroyed the country. The goriest days in history.

And so, ended the rule of honorable kings in India. This story does not end like that. Collecting all his loots the winner rides back home. He amuses himself in wealth and women as well in proud display of the fighting skills of his spoils of war. One such day he amuses himself with the archery skills of a blind slave. Just by the sound of the oath-breaker, the erstwhile ruler of Delhi fires an arrow piercing through the middle of the head. No important person survived that day. Delhi was ruled by slaves for a hundred years. Only the story survived, carried forward in poems from generation to generation as the land still pays its homage to the great Prithvi Raj Chauhan.

Image by Ameya Clicks from Wikipedia

Prithviraj Raso is very popular in contemporary indian literature. Honed upon years of updates by various kingdoms in the state of Rajasthan, the story has deviated from history. The Rajputs are the most resilient and powerful folks in India who survived multiple raids by the invaders springing back up each time they were defeated. They never were able to get to their former glory and capture Delhi. They have the exaggerated account of their last king of Delhi who was betrayed, cheated by dishonorable tactics by not only the enemies he had pardoned but also by his own allies to extract out needless vengeance.